Luke Lewis is a 3rd Degree Black Belt in Korean Taekwondo.  He also holds a 2nd level in Lausatok Glima, the Viking Martial Art and Scholar in Historical European Longswrd  Luke is a native of Carteret County and the son of Masters Russell and Jennifer Lewis.  Luke is the 2014 AAU Taekwondo National Champion as well as a Double Gold Medalist at both the 2015 and 2019 Junior Olympic Games.  He trains currently trains in Taekwondo, Glima and Historical European Long Sword.  He also crosstrains in Wrestling, Judo, BJJ, Sport Karate, and Kickboxing. In addition to his martial arts, Luke is an "A" student and has attended 3 engineering camps and several NASA Space Camps in Huntsville, Alabama. 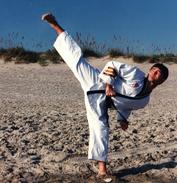 Your first class is always free.  This is your chance to get out on the floor and see what we're all about! 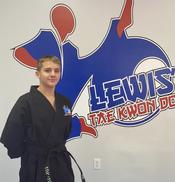 Chief Master Russell Lewis is a 8th Degree Black Belt in Taekwondo, Certified Instructor, AAU Coach, and is the owner & head instructor of Master Lewis' Taekwondo.  He is a native of Carteret County who was born in Sea Level. He was introduced to martial arts in 1980 by his grandfather, Melvin Styron "Junior". Cedar Island native, Mr. Styron had studied Judo during WWII while in the US Navy.  Master Lewis has been teaching Martial Arts in Morehead City since 1990.  Taekwondo is his passion and he strives to provide the highest quality martial arts instruction to the community from which he grew up in.  Chief Master Lewis holds multiple national titles, is a 2 time World Champion in fighting and a 5 time World Champion in forms.

You tried it and you're ready to join!  At Lewis' Taekwondo you you never sign a contract.  Our students stay at our school because they want to train with the best, and not because they are bound by a contract.  Family discounts available on tuition. 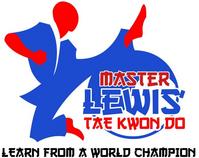 Lewis' Taekwondo taught my son the confidence he needed to stand up to bullies and better grades in school!  Thank you so much

Learn from a world champion!

Master Lewis' Taekwondo is locally owned and operated.  The Russ Lewis has been teaching for over 30 years and is proud to offer the largest variety of martial arts programs in Carteret County, including Traditional Taekwondo, Historical European Martial Arts, Historical Scandinavian Viking Glima, and Sport Karate.  We invite you to visit us and discover the difference our fun and exciting classes can make in your child's life.  Master Lewis' Taekwondo is a proud member of the Amatuer Athletic Union, AAU.

There's more to martial arts than just self-defense.  No matter what age, we strive to help our students progress confidently towards their personal goals in a fun, supportive & safe environment.  Whether you want to improve your overall health & fitness, improve mental focus, reduce stress, lose weight, build self-confidence, learn self-defense skills, or just have fun, we're here to help achieve your goals.